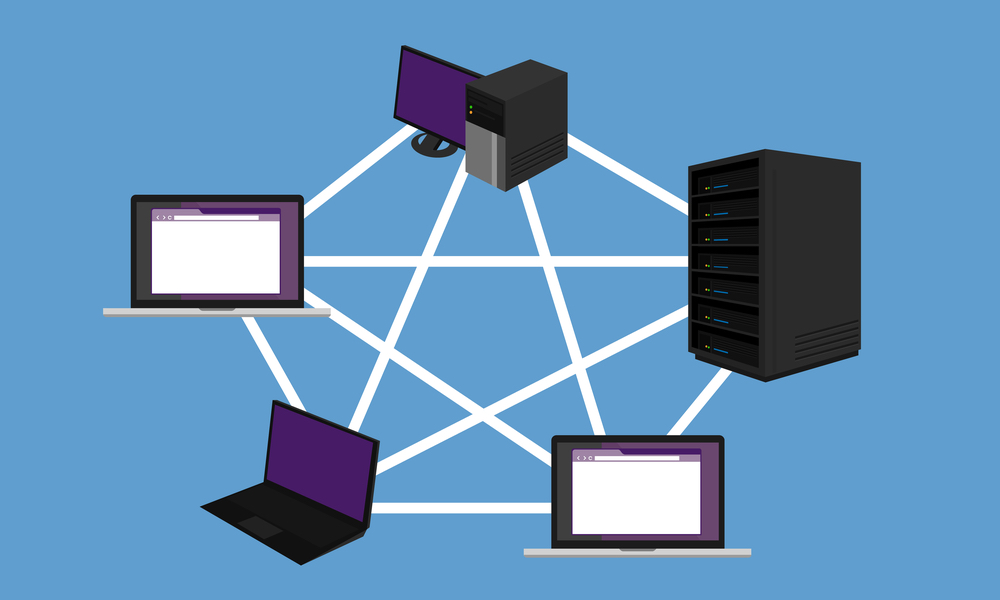 Deciding what kind of network you want to set up for your bustling office can be a confusing process. If you aren’t especially tech savvy, you can get lost in a lot of foreign computer jargon. You can endlessly click from one article to the next, and be no closer to discovering what options best suit your needs. If this sounds like something that you might be going through, don’t think that you’re alone. Many people have struggled with the very same concept. The good news is that there is light at the end of the tunnel. We’re here to help you sort that problem out.

You can get a firm grasp on the various network configurations by being familiar with some key terms.

First of all, let’s examine network. This is an easy one since it simply refers to a collection of computers and devices such as printers, which are connected, whether by wires or wirelessly, so that they can trade data with one another. A network topology is the logical pattern in which the various devices, called nodes, are connected to one another.

There are a variety of topologies to choose from based on your specific needs. A star topology arranges the devices around a single hub computer, but if the hub fails, so does the system. A bus topology, in which all devices are connected along a single line, is great for small networks, but it has the same problem as the star configuration. If there is a problem with the main line, the system stops working. Ring and tree topologies are similarly connected, and they have similar shortcomings when it comes to device failure.

Perhaps you are working in an office with a large network of computers, and you would like to prevent the failure of one of them from disturbing the rest. That makes you hesitant about the above topologies, and curious about something called a mesh topology.

Now that you have a little foundational information on network connections, it’s time to decide if a mesh topology is right for you. The way to do that is to consider the mesh network advantages and disadvantages.

The Pros of Using Mesh Topology

Let’s start with the common reasons that people prefer to use a mesh topology to configure their network.

It Can Handle High Volume

Networks configured with mesh topology can handle a higher volume of data because you have multiple devices working together and transmitting data at the same time. It makes sense, right? If six separate computers can accomplish incredible amounts of work, then six computers that are all connected to one another can accomplish even more.

It Compensates for a Weak Link

Because information is being simultaneously transmitted to multiple devices, one device can fail, and the network can still work. If computer A and computer B are both sending the same messages back and forth with computer C, it’s okay if computer A malfunctions. Computer C still gets the message.

The Downsides of a Mesh Topology

Mesh topology is sounding pretty good so far, but there are a few drawbacks to consider.

It is Costly to Maintain

Mesh topologies are more difficult and time-consuming to configure, making them more expensive to set up. Because all the devices are connected, you get what are called redundancies. These redundancies ensure that the data gets transmitted even if one device fails, but they also mean more connections, more work, and a higher cost to install.

It is Complex to Install and Monitor

Adding to the cost of mesh topology networks is their complexity. They take thoughtful planning to create and maintain, and because of this they cost more to begin with. Whether you decide to use a mesh topology will probably come down to cost and volume. Your large office may benefit from a topology in which all of the devices communicate seamlessly, but is the cost and complexity worth it? Can you afford to have it maintained?

Could a Mesh Topology Be Right For You?

You also have to consider the likelihood of failures within the other models of topology. Sure, a failure in one component can stop the whole network in its tracks, but how likely of a scenario is that for your company? Is it a frequent enough occurrence that a mesh topology is worth it? When you can answer these questions, you’ll be able to pick the configuration that is right for you.

Our review has highlighted the good and the bad of installing mesh topology in your office. We’ve also thrown in some jargon so that you understand the terms that are vital in making your decision. It’s up to you to weigh up the pros against the cons and decide if this type of system will work for you.

If you do decide to install mesh topology in your office, we’d love to hear your experience with it. If you’re still uncertain about some aspects and have to have a few questions answered before you make up your mind, don’t hesitate to get in touch with us. We’d love to hear your concerns.